Direct Marketing, Magic and Creepiness: I create a 2x2 grid!

In a meeting last week we were talking about geofencing, the technique of identifying someone's location based on the signal from their mobile phone, and the use of geofencing for pushing targeted marketing messages.  The marketer's dream use of this tool is that a customer who wants to buy your product, say a hammer, is walking by your store and they get an alert, "Hey, we have hammers inside! Come right in!"

Rightly so, though, someone in the meeting mentioned that with these kinds of messages,there's a line between "magic" and "creepy".

It's a line that all Direct Marketers need to respect, whether using SMS communications or another medium like email  We collect information about customers and are growing increasingly efficient and sophisticated about using it to target products and offers to specific individuals.  When this works well, from the customer's point of view it's like we knew what they wanted before they even wanted it, but when it works badly we can come across as presumptuous idiots or creepy stalkers.

Later in the meeting someone else gave an example of a text campaign he opted in to that didn't work well at all - he'd just bought a new car from a dealership and signed up for regular text messages, but all the ones he received were trying to get him to buy a new car.  This fell on a different spectrum, between "magic" and "really not magic", and so I set my mind to trying to figure out the model that would show the relationships between these example.

And lo, I ended up creating my first ever 2x2 grid!  I first ran across these in business school, and was the most impressed when I once participated in a consulting competition among my classmates.  We were in groups of four or five, received a case study and had a limited time, I think it was a couple of hours, to develop a response to the case and present it.  My team was kind of dysfunctional because we had no brilliant ideas and everyone was waiting for someone else to jump up and lead us, but another team I watched present included a graph that perfectly explained the universe of the business situation and crisply locked in their concepts.  I remember the presenter making a passing snide comment about, "a 2 by 2 grid, of course", and I realized that this was a business "thing" and that I didn't really know how to spin them out.

That was my first exposure to the 2x2 matrix but it is actually quite famous and well-known, with its own website, Wikipedia page, and whole book you can buy from Amazon, and articles calling it "a consultant's best friend".  I realized it was just a b-school technique, a model you could whip out and apply to business situations to look smart, but it really did make my classmates look smart.

And I never got the hang of using them, until this meeting last week!  Because as I was thinking about "magic" vs "creepy" and "magic" versus the really not magic texts the new car owner had received, I realized that they weren't arranged on a single spectrum, they were arranged along two axes!  Voila!  The sides of a matrix grid!

Dividing these axes into two, you get these four quadrants:
Here is my grid! 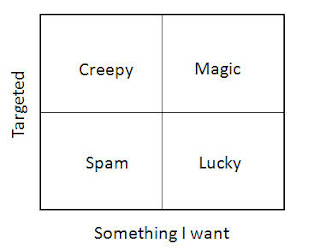 I've been working in online marketing since early 1997, and before that worked in academic Philosophy. The thread that runs through both careers is an interest in language and the way communication conventions emerge in social contexts.

Although I work in the industry, the views here do not necessarily reflect those of my employer, and I use only my own time and resources to create this blog.